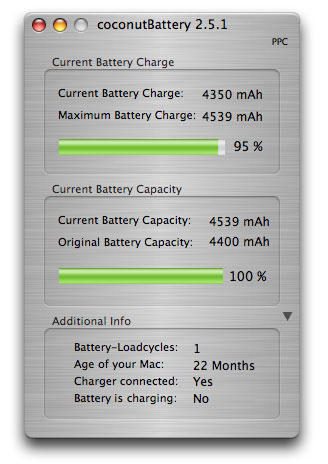 and just like that my battery fixed itself! Ha. if only – I actually coughed up and bought one from ebay in the end as the Apple store one isn’t going to arrive until well after plone conf seattle (but when it does i’ll have a spare which will give me a full working days worth of battery power). I think the calibration is confused at the moment as it thinks I have 4539mAh capacity (out of 4400mAh) – the battery status think in mac osx is stuck on “calculating”

archived comments
Mine climbed from 4300mA up to 4432mA (or something) over the first few cycles. (Although still not quite the same colour as the rest of the machine, even after a few reboots…)