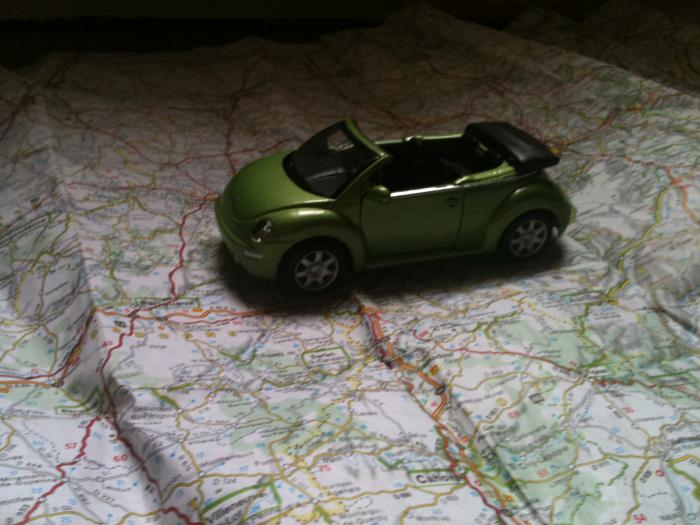 I’ve just returned from a six week working holiday, touring france (and a bit of spain) with my wife and son, in a beetle, living in a tent and working as a freelance web developer at the same time. I thought i’d write up some of the lessons learned, both about camping/ touring and working.

Without a doubt the thing we missed most was some kind of fridge. We had a cool bag and some ice blocks (not all campsites will let you use their freezer, plus you need to remember to swap them frequently when you are allowed), and also tried using a bucket of water – both failed miserably. Various options are available for powered coolboxes, ranging from 12 volt only, 12v volt + mains and electric/ gas combos. This is something i’ll be looking into – expect a lengthy post on this some time in the future!

The Quechua tents were brilliant – we had one Quechua base “full” and two pop-up tents which docked up to the base as bedrooms. All survived storms and we loved being able to pitch them and pack them down in minutes. Having owned various tents over the years, I can’t imagine going back to a tent with poles – it’s just not worth the hassle when touring.

Unfortunately the zip on our 3-man tent is now broken. This is fine when it is docked up to the base, as the inner door still works, but it is now fairly useless as a standalone tent. However, I remain impressed enough with the general quality of the tent, so I’ll replace this at some point and may consider adding another base tent to use as a kitchen area or bedroom (with the optional inner).

Due to car space considerations we skimped on pillows – big mistake! Travel pillows and cushions don’t cut it for long term camping. If we had more room, i’m sure a better mattress (we had self-inflating mattresses, which are good, but i’d still wake up with a dead arm now again) would have been welcome, as would duvets instead of sleeping bags.

Is possible – just! This car is basically just a MK4 golf with a silly/beautiful* shape and much less boot space, so it is fine on the road for long journeys (over three and a half thousand in the this case), if a little thirsty. Even though it is ten years old with 100K+ miles on the clock, the only mechanical problem we had on the trip was the air conditioning breaking, although it was already faulty I suspect. With roof bars/ bag we managed to carry a surprising amount of kit, but packing the car was a work of science. I’m investigating options to be able to carry more for future trips – trailers, tow ball mounted load carrier, big roof box – no doubt i’ll write about my findings on that at some point. The biggest plus for the car was the smiles it got when we arrived on a campsite fully laden 🙂

My experiments with small solar panel and battery pack combos – the solargorilla/powergorilla combo and the SolarSupra showed that it is possible to charge a laptop with solar power in France during the summer, but only for occasional use. To get consistent full working days would need a more sophisticated setup – larger panels and bigger batteries. I’ll be continuing these experiments in the UK, and doing a side by side comparison of the solargorilla/powergorilla and solarsupra.

As an afterthought I packed the battery from my spare macbook. This turned out to be the most useful of the “gadgets” I took with me. I’ll probably buy one or two spare batteries before my next trip, plus a standalone charger. It’s a pity the new macbooks and macbook pros don’t have a removable battery – they may have better battery life, but it is really useful to be able to carry a few spares.

Most of the sites we went to had electric hookup, but not always on all of the pitches. This means that if you don’t rely on electric hookup, there is more choice if you just turn up without booking during busy times. I wanted to see if I could charge my laptop with no reliance on an electric hookup, with very limited success. Also we saved somewhere in the region of £200 by not paying for electric hookup. However, I hadn’t realised the extent to which we would miss a fridge, and even though i’ll probably buy one with the ability to run from gas, electricity is going to be the most convenient way to run it long term. I’ll be buying some electric hookup kit for the next trip, but I don’t want to rely on it to the point that I would turn down a pitch if it didn’t have electric hookup. It’s worth noting that there are two different types of electric hookup – the caravan hookup type socket, and some that are just northern european plug sockets. I’ve been told that the polarity is often wrong on these sockets, which doesn’t stop devices working, but will make surge protectors useless – and surges are common, especially during storms!

The Halfords powerpack I have previously referred to as a leisure battery, isn’t actually a leisure battery at all. A proper leisure battery has much higher capacity, and can be discharged to a higher level without damaging it. The main obstacle to carrying a leisure battery is our tiny car, but if I can find a small enough one, i’ll probably get one for the next trip, and leave the powerpack. My main worry about not having any type of 12 volt battery on board is for when I accidently happen to flatten my main car battery, although this didn’t happen at all on this trip, so maybe i’ll just buy a decent set of jump leads and improve my french vocabulary to include “gis a jump start mate!”, rather than lugging a battery around.

My main weapon of choice is a macbook. Not a macbook pro, but the older plastic one, with the removable battery. I actually have two, and they do the job. I like the fact that as they are a few years old now, i’m not as paranoid about them as I would be a brand new macbook pro. I’ve been happy using the macbook to do all kinds of different work, ranging from python and php code to photoshop. I decided to buy a netbook as a spare machine, rather than carry the second macbook as a spare. In reality I didn’t use the netbook much at all, as it is so fiddly to use, particularly the trackpad, but it was still nice to know it was there if something happened to the macbook. I think i’d do the same again, although if I got a chance I may try it as a hackintosh, to see how useable it is.

In my last post I discussed how difficult it can be juggle work and holiday. I haven’t really quantified how much work I managed to get done over the trip, but I suspect it falls short of covering costs. I think our next trip will definitely involve an extended stay in a particular location where I do a set number of days work on a particular project, then limit working on the rest of the trip to emergencies and short maintenance jobs here and there. I think this way i’ll know in advance how much money i’m likely to earn and manage my client’s (and my family’s!) expectations better.

This deserves a post of it’s own, but probably on my main web development blog. I spent a lot of time working disconnected from the net and this had knock-on effects for the way I work on projects. This blog is actually written on an offline text file based blogging engine I knocked up in a vw dealership while waiting for my car to be fixed a few months ago, and it turned out to be very useful, and I learned a few other lessons that I will endeavor to write about in more detail.

* delete as applicable – I think it’s the latter 🙂