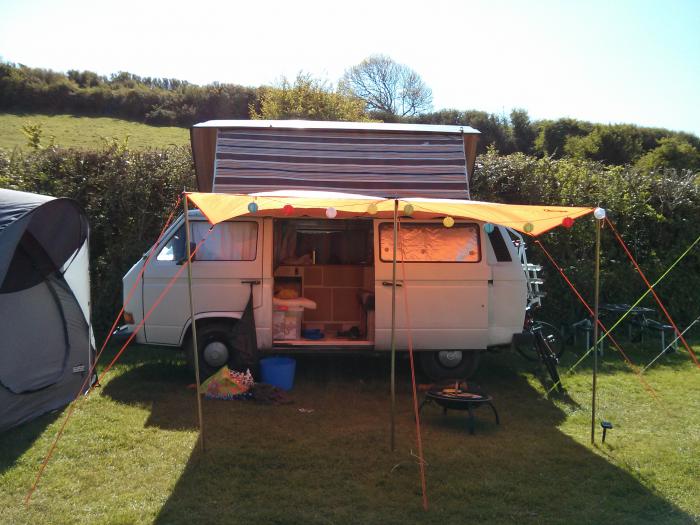 In September 2012, we bought Rocky, a 1983 VW T25 Devon moonraker campervan. The T25 (also known as a T3 across most of europe), is the last version of the rear-engined VW transporter-based campers, and is affectionately known as the “brick”, or “wedge” (on account of its box-like shape), and was styled to be in line with the other VW range of the same era, i.e. the front grill and lights resemble those found on the old golfs and passats of the time. The earliest T25s had an air-cooled engine, but then VW swapped to water-cooled engines.

This is actually my second T25 – back in 1997 I had a blue panel van which I converted into a basic camper and went travelling around Spain in for six months (I will blog more about that van and the adventures I had in it another time). I had to let that van go, because it needed an engine rebuild, and at the time I hadn’t got the time, space or skills to do it myself, or the money to pay someone else to do it. I’ve hankered after another camper eversince, but not necessarily a T25, so I wanted to blog some of our reasons for choosing this one.

Over the years i’ve spent hours trawling the web looking at campervans, so when my wife and I decided we should go ahead and get one, I had already narrowed down a set of criteria for what to look for:-

The unexpected advantage of a 30-year old classic van is that it can be put on classic insurance, which with a limited mileage restriction really brings the price down. If we could get it on a driveway or in a garage, the price would come down further. We were starting a new insurance policy, as we are keeping our car on the road – a new non-classic policy with zero no-claims would be very expensive and might have been a show-stopper.

Another advantage to having a classic camper is the community of enthusiasts, who are able to offer advice and encouragement. Club 80-90 for T25 owners has an active forum, and there is usually a club 80-90 presence at VW and camper festivals that happen each year.

Apart from ticking all the boxes for what we wanted out of a camper, I have an affection for the T25, having owned one before. As soon as I got behind the wheel for a test drive, the memories flooded back and I knew we would be buying him.

Reasons not to get a T25

Having explained why we chose the T25, I’ll also talk about possible reasons why you might not want to get a VW T25:-

So far we are really pleased with Rocky. We’ve had a few minor issues (which i’ll blog about in due course), but have made the right choice, and Rocky is a keeper. We’ve done several nights camping – even in December, thanks to electric hook-up and a fan heater, and looking forward to adventures this year.