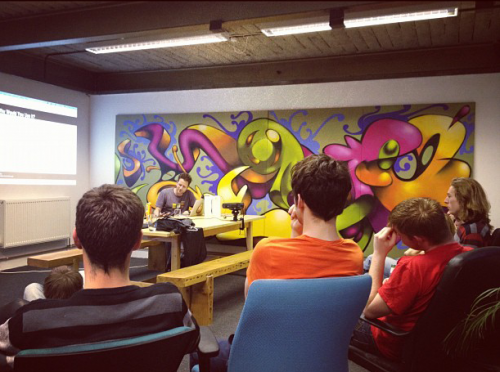 On Wednesday, the day after my lightning talk at the Django meetup, I gave a talk “An introduction to Backbone.js“, at a newly formed javascript meetup, loosely based around the locality of southville in Bristol. This was an interesting experience as other than using Backbone.js on one project (largely written by other people, so I only really dipped into it to add stuff), when I was volunteered to do the talk by Andy Mcgregor, I didn’t actually know a great deal about Backbone!

When it came to the crunch, i.e. pretty much the day before the talk, I started searching for online tutorials that might demonstrate what I wanted to cover in the talk, and the first one that I found was Hello Backbone.js by Artur Adib, which provides a fantastic step through with a set of examples building up on the previous example. I created a little “To Do” list app based roughly on these examples.

I then found an excellent set of video tutorials called Introduction to Backbone.js, by Joe Zim, which run through some interactive examples for Models, Views, Collections, Routers and Ajax within backbone, which really helped the penny drop for me, and gave me a basis for my own live-coding examples. The audience (of about 20 people – not bad for a highly localised, highly niche meetup!), were a mixture of people who already know backbone and people who have never used it, but hopefully there was something useful there for everyone. On a personal level, being put under pressure to be able to demonstrate something, accelerated my backbone knowledge very quickly, to the point that I would confidently start my next project using backbone.

The moral of the story is – if you want to learn a new skill quickly, you don’t need to pay to go to a workshop – volunteer to do a talk instead! Even if you don’t want to do a talk, find your friendly local user groups (or friendly online user groups, if there’s none local to you), and get involved. I’m not knocking paid workshops – there’s a place for those and i’m sure some of them are good value for money, but i’ve always loved the way that the web community are happy to share their knowledge for free, and you really can find the knowledge out there without spending your hard earned cash! Being part of the web community provides valuable support too when you get stuck, something that doesn’t happen in the world of “traditional” paid training.

The next southville js talk is “An introduction to CoffeeScript” by Tom Holder on wednesday 12th July, kindly hosted again by SimpleWeb. Also keep an eye on the Bristol Web Folk calendar for upcoming web related events in Bristol – there’s loads!

Photo above nabbed from an instagram pic by Chris Mytton