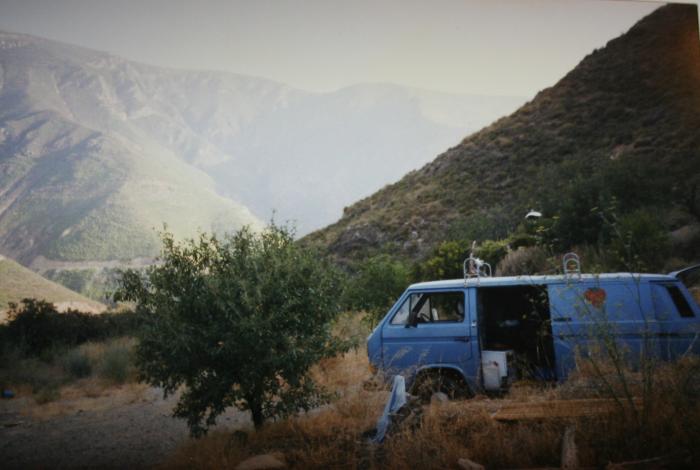 I found some pictures of my old VW T25 camper, “The strawberry van” – a 1983 1.9 water-cooled panel van. I bought it off some clown. No seriously, I bought it off a professional clown who bought it for carting his equipment to gigs. He’d decided to use a landrover he had bought instead, as it was apparently better for towing his large trailer.

As far as camper conversions go, this was basic – I built a fold-down bed along one side, from the frame of an IKEA futon and using the futon mattress, and had a foam mattress from a caravan across the back, making two single beds. I also had a cooker from a caravan on the floor, crudely anchored to the back of the passenger seat uisng bungee straps. The curtains were also held up by bungee straps and made from an IKEA duvet cover. The only bodywork modification I made was to fit a sunroof halfway down the van roof for ventilation and light in the back.

These photos were taken in 1997 on my “spanish adventure” – where I spent six months travelling in my T25, alone and with friends, around Spain and hanging around for several months in a beautiful valley know as “el morreon” just outside Orgiva, in Andalucia. El Morreon is a collection of dwellings based around a river bed, which is mostly dry in summer, and to reach the valley requires a bit of mild off-roading, including fording the river. Full-time travellers often over-winter there, when the river bed is impassable in a motor-vehicle.

I’ve lost the full record of where I travelled, but I started by sailing with friends on the ferry from Portsmouth to Bilbao, then we spent some time in Santander before splitting off, travelling along the north coast, into the Picos de Europa national park, visiting Gijón, Oviedo, León, Valladolid, Salamanca, Avila, Madrid, Toledo and Granada, amongst many other smaller places that I have no idea of the names. If only geo-tagged digital photography existed then – i’d love to look up where some of my pictures were taken. I also travelled up and down the south coast, making petrol and food money by busking outside (and sometimes inside) bars in tourist traps along the costa del sol. Most of the time it was wild camping, with the occasional stop at a proper campsite to use showers and washing machines etc. I travelled back to the UK through france and the channel tunnel.

The engine on my old van was in a bad way, and it only just got me back to the UK, where unfortunately I had to let it go, as an engine rebuild or replacement was then beyond my reach. I’m not 100% sure what was up with the engine, but there was a problem with one of the pistons which meant it was using a massive amount of oil – I had to top it up with a litre or so at every petrol stop. To say it was a bit smoky would be an understatement – the back of the van was covered in oil and it would stall whenever the revs got low, and wouldn’t restart until the engine had cooled down. I’m not quite sure how I got it back to the UK – I drove through most of france in a single day – stopping using the handbrake at traffic lights so I could keep the revs up and avoid stalling. Once across the channel, I also spent several hours at a petrol station in Kent, where the van was refusing to start, and I though I might have to arrange a tow back to East Anglia, but eventually got it started again, and completed my trip stopping only to pick up some hitch-hikers!