Just before xmas I installed the Path app out of curiosity, as I had noticed that a few of my friends were using it. It’s a lovely app, and I really like their policy of limiting connections to 150 to encourage it to be used as a communication tool for friends rather than a crazy marketing scatter-gun to be used for self-promotion by individuals and businesses, as most social networks inevitably become.

This post isn’t a criticism of Path though, it’s about mobile internet usage in general. By mobile, I mean smartphone, rather than tablets/ netbooks. Nearly always when i’m using a mobile version of something, I feel claustrophobic – from ham-fisted accidentally liking or retweeting stuff to not being able to find missing or hidden features, I feel myself desperate to get on a laptop and use the “full” version instead.

Mobile web usage (by which i’m including standalone apps which transfer data via the internet) is going through the roof – but how much of that is people using it only because they happen to be somewhere where they haven’t access to a laptop/ desktop computer, versus people who would actively decide to use a mobile version of something in preference to a “full” version on a laptop?

There’s been much debate recently about responsive web design in the last year and about favoured approaches to making websites and web applications adapt to different devices. One of my arguments in that is that I like the option to zoom out and in of the full “desktop” version of a web page when i’m using my iPhone – I like to scan around and zoom in to parts of a page, particularly on a news site, rather than scrolling through loads of text on a mobile version of the site, feeling like i’m missing stuff, and anxious to at least see the desktop version, zoomed out to see where I am in relation to everything else.

However, that doesn’t seem to be a popular opinion – I wonder if i’m part of a dying “desktop orientated” generation – I can use and enjoy a mobile version, but always feel shortchanged – it’s never as satisfying as the “real thing”, whereas the next generation, introduced to the web via a mobile device don’t feel that lack of wider context (wider meaning literally wider in some cases), and feel shortchanged when they get something aimed at a desktop/ laptop computer?

Just experimenting to see if it is possible to create a blog post on my new eatStatic based blog using droptext on my iphone.

Under the current set-up, if I wanted to use the “drafts” folder, I’d then need to log into dropbox.com to move the file to the main folder, as there is no way of moving files in droptext (as far as I can see)

Inserting an image would also be tedious – I can upload a photo using the dropbox app, but I can’t rename it something suitable, without going to dropbox.com, and then writing HTML on an iPhone is never much fun

I think if I want to consider mobile blogging, I’ll need to build something more convenient, such as an email to blog post script, similar to Posterous and wordpress plugins I’ve seen.

I have been buying and experimenting with some equipment to help keep my laptop charged while i’m away from mains electricity. I have few tools at my disposal:- 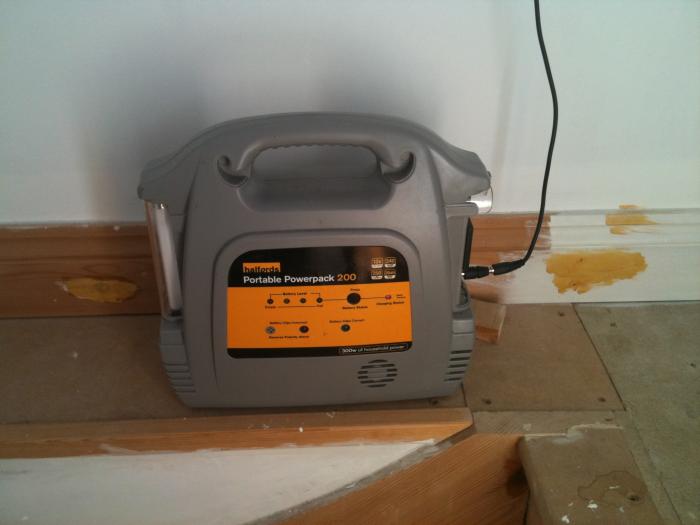 It’s basically a 12 volt leisure battery with a lamp, 240 volt inverter and air compressor built in. I only got it because I inherited it with the car (the previous owner bought it to jump start the car when it had been in storage too long and the main battery had gone flat). It can charge from a 12 volt car socket or mains adapter, plus I am having some success charging it from a solar gorilla. The battery sais that it is 20ah, whatever that means in lamens terms.

Using the 240 volt inverter is incredibly inefficient, so only for “emergencies” really. More efficient is using the 12 volt output with the Trust DC-DC converter (below) that allows me to step up from 12 volts to the 16 volts required to run my macbook.

The obvious downside of this battery is that it is very heavy, only suitable for lugging around in the back of a car, so while it will be useful on a campsite with no mains hookup, i’m not exactly going to lug it into a cafe! 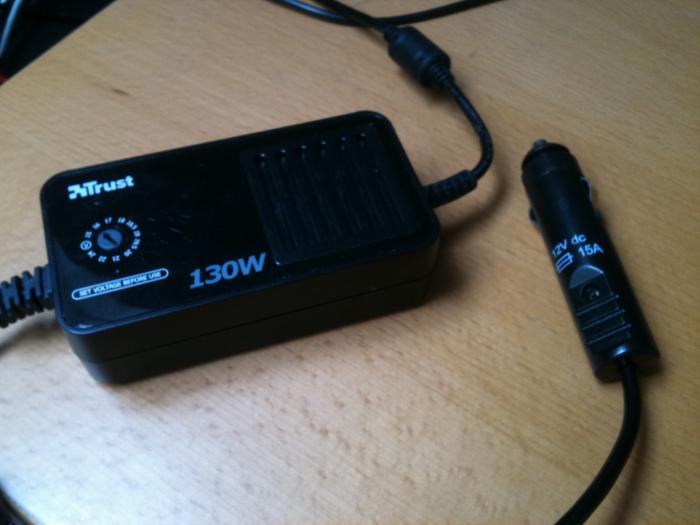 This is really useful – if I wasn’t a mac user, there would probably be a charger tip included with this, but due to licensing there isn’t. Therefore I had to take the DIY approach of snipping a section of cable from my spare apple power adapter (doesn’t feel good doing that, knowing they are about £60 to replace!). I also modified one of the tips to allow me to fit a section of wire with spade clips, to make it easier to plug in other adapters if necessary.

Amazingly this works – charging and powering the macbook. I need to do some proper experiments to see how many charges I would get out of the leisure battery.

It also has a USB port so I can charge my iphone from it at the same time.

More details on the dealer’s site. 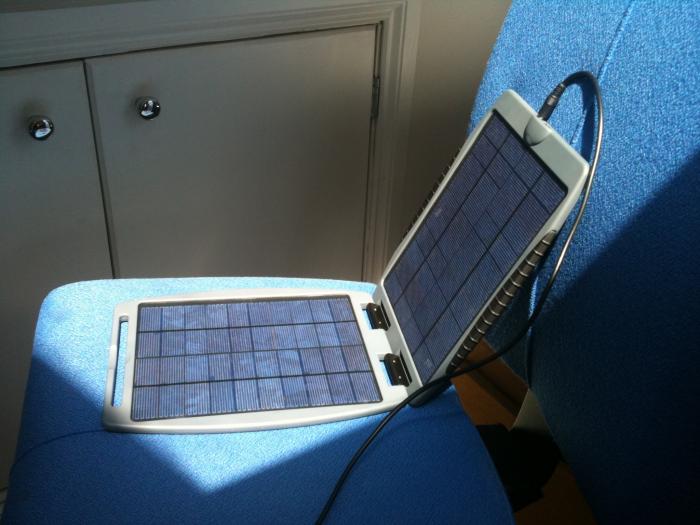 This is a lightweight portable solar panel that will apparently charge a laptop. Covered in more detail here