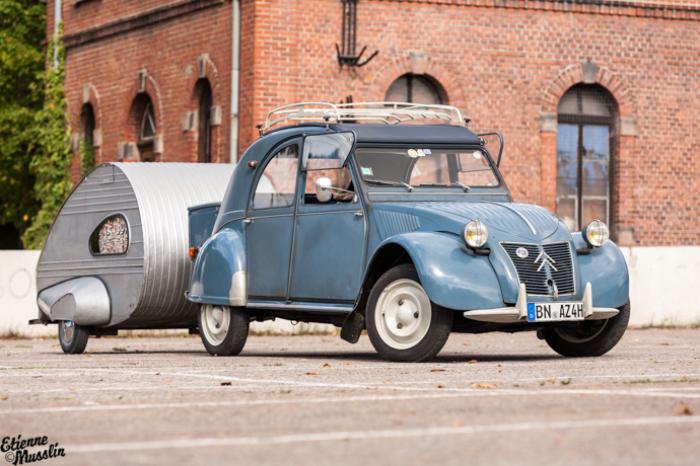 Our VW camper is already pretty small, but will sleep four adults, and will fit in a regular parking space, but it is (for us) a second vehicle, and being a vintage vehicle, currently off the road again for some body work tidying and preventative maintenance. It therefore can be an expensive hobby, and we often discuss how we might be better off with something that could be used as a reliable family car and run-around as well as a campervan, or towed behind a small family car.

I recently went on a surf/skate trip down in Cornwall, and with Rocky off the road, found myself back in a tent. I think once you’ve experienced the relative comfort of living and sleeping in a campervan, a tent feels quite a step down! It didn’t help that I was in a tiny pop up tent, on a deflating airbed, trying to cook on a tiny picnic stove, which I struggled to keep upright.

Teardrop trailers and compact caravans such as the Eriba puck or slightly larger Pan Familia would be one solution – small and light enough to tow behind a small family car. The advantage of a caravan is that once pitched up, you can leave everything set-up and still have use of the tow car. Unfortunately, we live in a city, and have no off-street parking, so unless we paid for somewhere to store it, a trailer or caravan wouldn’t be ideal for us.

An estate car or small van is easily converted to a micro-camper with the addition of a mattress of some sort and window coverings for privacy, but a small car takes a bit more ingenuity.

After doing some research, I was amazed to see how common car-campers seem to be. Basically as long as at least one bed can be squeezed in some how, a can be used as a microcamper. If you google for “microcamper” or “car camper” on image search, you’d be surprised at the lengths people, worldwide, are going to to make their cars into DIY mini-campers.

Popular base vehicles for microcampers seem to be the Renault Kangoo and Citroen Berlingo – small, economical family cars, with an “estate” car rear end, making them like a small cargo van with the seats folded down. All manner of gadgets and conversions seem to be available, to cram in a double bed. Cooking activities usually take place to the rear of the vehicle, rather than inside – probably a sensible idea! These vehicles, or at least the van versions are the modern-day equivalent of the 2cv/ Dyane based vans – I actually wrote about an Acadiane microcamper (van version of the Citroen Dyane), a while back.

It’s not just DIY eccentrics building microcampers either – established motorhome converters are offering one and two-berth campers based on the Kangoo and Berlingo (at fairly hefty prices!). Even luxury brands such as BMW’s mini are getting in on the action, advertising the mini as a camper, using different set-ups such as a roof tent, a teardrop trailer and a single bed crammed into the interior of the clubman model.

We have a 1998 Vw “new” beetle, which we’ve done plenty of tent camping in, before we got our current camper. I started working out if there was any possible way of sleeping comfortably inside, without having to modify or remove the seating. Just for a single person, obviously – a surf-trip overnighter rather then a serious live-in vehcle. With the rear seats folded down, there isn’t enough room to stretch out, so I’ve set myself the challenge of coming up with a solution.

Anyone who has owned a new beetle will be aware how deep the dash is – space that can be taken advantage of, and also, despite being a small vehicle there is a surprising amount of headroom in the centre of the vehicle, due to the curved profile of the roof.

I recently spotted a “tent cot” on a campsite, and was also looking at a tiny hiking tent, both offering minimal headroom, just the basics in shelter from the elements – so I started studying the roof void of the beetle, and realised there could be a way to fit a full length bed in after all.