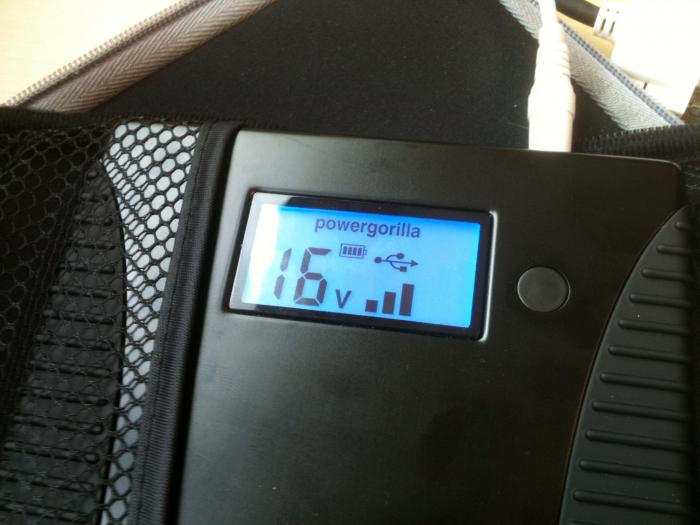 First test – does it charge at all?

Yes. Using the magsafe “sample” powertraveller sent me and with the power gorilla set to 16 volts, it does indeed charge the macbook. I’m very happy about that, otherwise this might have been an expensive experiment! This also confirms that the cable is suitable for charging, so therefore my previous experiment with the solar gorilla confirmed that it should have been charging, but didn’t.

Test two: how long does it last?

Starting from a half charged macbook, I plugged in a fully charged power gorilla. I wanted to see how many charges I got from it, if I unplugged it whenever the macbook battery is charged and plug back in again when it gets low. Simultaneously powering and charging the macbook drained the power gorilla before it had even completed the first charge. I’m not sure what to make of that – in theory the powergorilla has four times the capacity of the macbook battery – is the charging process so inefficient that most of that is wasted? I guess I have to factor in the fact that the macbook was also drawing charge whilst being charged, because it was running. I need to repeat that experiment with a sleeping macbook.

I tried again starting from a fully charged macbook, and fully charged powergorilla – I was also using the macbook, and got just over two hours before the powergorilla was drained, and the macbook status went from “charged” to using the internal battery. This is about the same amount of time I get from the internal battery. Once again, this is disappointing, as in theory the powergorilla has four times the capacity. I should point out that even the macbook (one of the older plastic ones) claims up to 5 hours battery life, in reality I usually only get about two and a half, as I tend to run a lot of stuff – virtual machines, photoshop etc. To continue the experiment I then carried on working from the internal battery until it was virtually flat. In total I got 4.5 hours – that’s combined total runtime from a powergorilla that claims 2 to 5 hours laptop power and an internal macbook battery that claims up to 5, so less than half in total!

Most importantly, this isn’t a full days work, and I need to allow for charging time too. The claimed maximum battery life is always higher than you get in reality unless you switch of wifi/ bluetooth, dim the screen and work with only a few lightweight applications. There are more details on expected macbook battery life here here. The newer macbooks and macbook pro’s claim more battery life, but via the grapevine i’ve heard that they still fall short of a days work when used under realistic load. Also these higher capacity batteries will require more charging therefore don’t necessarily solve my issues.

Will the power gorilla power/charge a macbook while it is being charged itself?

How long does it take to charge from the mains?

I’ve not worked this out yet – definitely more than 3 hours, but last time I tried I went to bed before it was finished, but it was charged when I got up.

How long does it take to charge from the solar gorilla

Obviously this is weather/ sunlight dependent, and i’m in the UK during a predictably unpredictable summer. I’ll post back here when i’ve done it a few times.