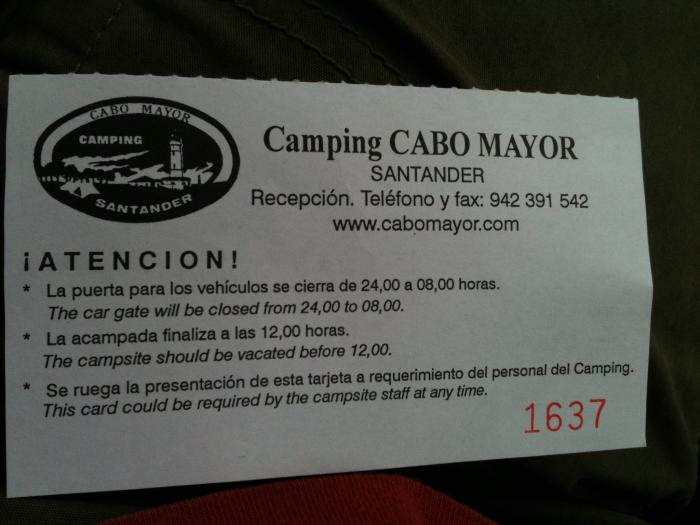 It’s seven o’clock in the evening and i’m being led on a wild goose chase round Santander in the north of Spain, by the very out-of-date “points of interest – cash dispenser” option on my satnav. I’m led to a building site, a car park and, worryingly, a cliff, before finally spotting a bank that wasn’t on the list. I park the car illegally in a spot reserved for motorbikes and run a lost tourist flip-flop sprint to the ATM to secure some cash for the evening. Camping Cabo Mayor – the campsite that we didn’t really want to stay – where i’ve left my wife and son setting up camp, informed me they only accept payment in cash, and we haven’t got food for the night either.

We’ve driven well over a hundred miles to get here from Biarritz. The whole european trip has been pretty much unplanned, but so far we’ve always phoned ahead to check availability, but after being greeted by spanish answerphone messages and total failure of online booking, we decided that with a list of campsites hastily scribbled in felt tip on a notepad the last time we had wifi, that we would chance just turning up. In the second week of August – “peak season” apparently. The first site we tried, 20 miles or so east at Noja was manic and full, the next one at Suesa we didn’t even stop to enquire, as we could see from the road it was full to bursting and it wasn’t what we looking for. We ended up at Cabo Mayor on the hills above Santander, somewhere i’ve stayed before, on the first night of my “Spanish Adventure”* 13 or so years ago.

We’ve obviously been spoilt by the campsites we’ve stayed at in France – on this site we are crammed in like battery hens, with barely room for our car and only able to put up part of our over-elaborate tent arrangement. After carefully locking all things of value out of site in the car, we take a walk up to the Cabo Mayor lighthouse and have a beer looking out over the sea. Annoyingly, it’s chilly – that’s not how I remember it. We then retire to the bar down the road from the campsite, where things are more relaxed and I get to practice some of my rusty Spanish – not very much really, but considerably better than my french.

Things were a bit different last time I was here. Back then as a young and single hippy in a beaten up van, I slept in carparks, down side streets, on beaches, in the woods and basically anywhere I thought I could stay for the night without getting moved on by the police. Back then I was also trying to earn a living as I went, but busking rather than coding – I think I am having slightly more success with the latter. Not far from where i’m standing is the spot where I first ever dared to sing in public – I played a lemonheads song to some random tourists and earned a few pesetas, leaving me on a high for days.

Back at the campsite we feel slightly marooned – there’s not even room to sit outside the tent to enjoy a drink. We don’t want to stay more than one night on this site. Without having somewhere in mind, it becomes obvious that carrying on further into spain the next day might be counter-productive for what we want to get out of this trip. We decide that we are going to make an early start the next day, back the way we came – a 280 mile trip back to our new favourite french site at La Romieu – we’ll have to save exploring Spain for the next trip, when we’ve done a bit more planning, maybe next time taking the ferry to Spain and starting the trip there. Meanwhile i’m happy knowing that back at La Romieu with wifi and a plug socket for the week I can get some work done and earn back the petrol money from our weekend detour.

*My Spanish Adventure is something that I always meant to write a novel about, but if it hasn’t been written yet, I doubt it ever will. Also, the things I thought would make interesting reading in my early 20’s, are probably less so now, but there must be at least a blog post in there!