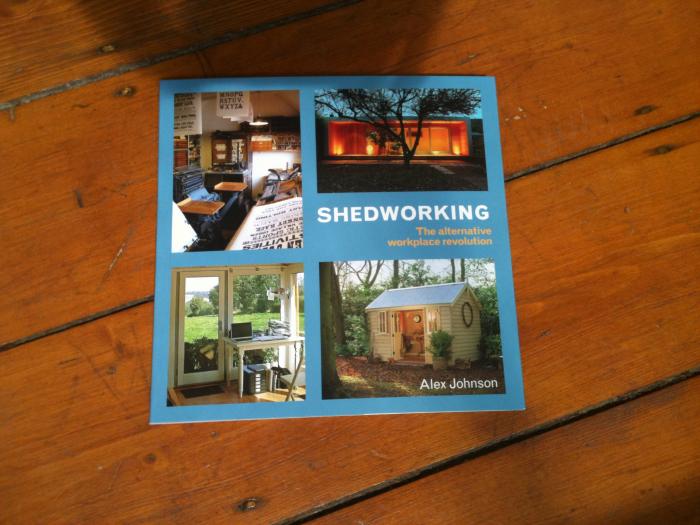 This blog has been a bit quiet recently, but contrary to what the title suggests, I haven’t been hiding in my shed. In fact since returning from our European road trip last summer I spent a while working from home, then on-site for Aardman for a few weeks, then I started renting some desk space in town. The desk space didn’t really work out – just like the previous time I did this, I found myself using it less and less, and eventually decided it wasn’t worth the expense. So now i’m back to home working, or more specifically right now, from the dining room table of a house we are house-sitting in Ireland!

The reason for the “shedworking” title is that I was given a book for my birthday “Shedworking – The alternative workplace revolution” by Alex Johnson, which showcases some lovely shed conversions for people to create a dedicated workspace in their garden. This is something i’ve considered doing, being the owner of a reasonable size breeze-block outbuilding in the garden of our victorian terraced house. While I was considering whether to give up the rented desk, it occurred to me that the money saved on rent could fund the work needed to create a work space.

I would need to replace the roof – currently blue asbestos, which although apparently safe if undisturbed, leaks a bit and i’d rather get rid of it. I’s also need to divide off some space to keep as a shed – storing bikes, tools etc. and create a well insulated space with some form of heating (a wood burner would be nice, but I suspect i’d need something else for shorter bursts of heat first thing on a winter morning!). Other than that, it would be very minimalist – I would need a chair and desk, from where I could work on my laptop. The wifi from the house reaches the garden so hopefully into the shed, and I could always use a range extender if necessary. Although I would likely gets mains electricity installed, I would like to keep this space “off the grid” – maybe I could invest in the big leisure batteries and larger solar panels that I would need to keep laptop/ monitor/ lights going. A trial run for whatever I would eventually fit into a camper van that i’m still fantasising about.

So walking a few metres down the garden to a shed could hardly be described as “on the road”, but it is very much in keeping with the theme of not working in an office, working with a minimal set of tools that can be packed into a bag and taken elsewhere at the drop of a hat.