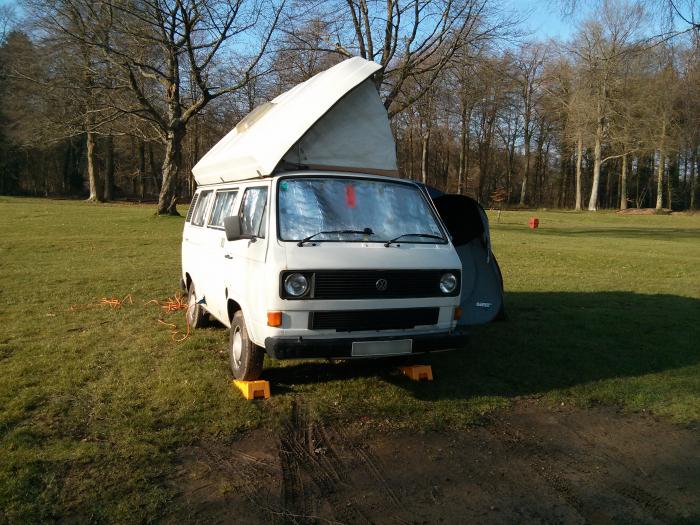 I’ve never been camping in February before, but with the sun shining and an electric heater promising to blow warm air onto our cold tootsies in the evening, I could hardly say no. Plus, last year all we had to keep us from the elements was a pop up tent, and I’ve been camping in April in Devon on a warm day and been absolutely frozen at night. This time though we had our T25 – Rocky.

Not particularly planned, we booked an electric hook up site on Friday night and spent Saturday morning stressing and dashing around the house trying to work out what we needed to put in the camper (lots of bedding) and what we already had in there (not a lot). We took way too long, and got on the road at lunchtime, but being the first camping trip of the year, we were out of practice, out of petrol and quickly out of patience with each other. We’ll get this packing lark down to a fine art eventually. From house to van in half an hour would be good. A a flippin’ miracle, but good.

We opted for a forestry commission site in the Forest of Dean and despite not having a bike rack, we rammed in 3 bikes in as well, angled to still leave elbow room for putting the handbrake on. I’m still getting used to the freedom of camping with space to pack. After years of tent camping and fitting everything into the tiny boot of a VW beetle, it’s a novelty to be able to take board games, pillows, fairy lights and still have room for a nine year old in the back. The site was fine, no tents in site (unsurprisingly) but plenty of motorhomes scattered around and still space to choose from. We parked, threw up the pop up tent that was once our camping bedroom and plonked the bikes inside. We then set about doing the most important thing we do in our campervan – make a cup of tea.

We did a bit of cycling in the woods, played some baseball with a newly purchased foam bat and ball, but pretty much tucked ourselves into the van with the heater on. I’m not that hardy, I like being warm and well caffeinated. With the heater on, the thermal covers on the windows and a film on the laptop, we were totally cosy and warm. The hot water bottles remained unused, it was an unusually still night too which probably helped keep the cold out, and overall, we drove home to Bristol with a gorgeous sunset shining into the van and three very relaxed campers bopping along to some cool tunes. Roll on Spring!