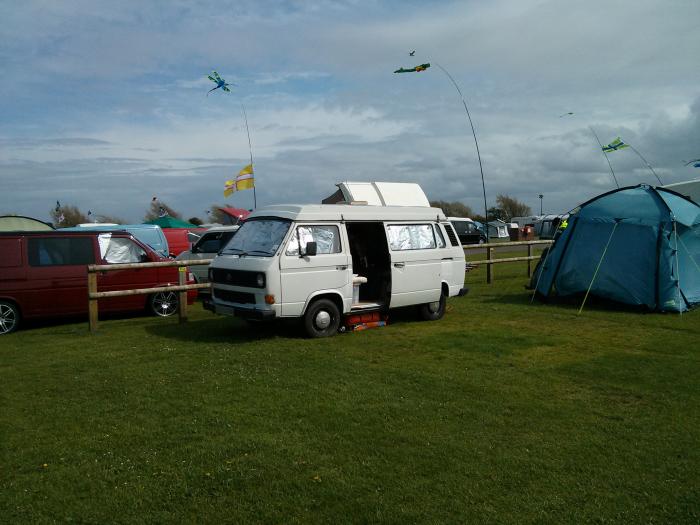 Last weekend we went to our second Vanwest event at Brean sands. Unfortunately we didn’t get the previous weekends amazing weather and it was ridiculously windy, with frequent rainstorms. I didn’t get a chance to try out our new canopy/ awning as it nearly blew away while I was trying. Our Quechua base seconds also nearly flew away when the pegs worked their way loose – before we got the van, we managed to camp in many a wind storm without that happening, so it’s safe to say it was definitely very windy!

The gale force winds were a good test of how feasible it is to use the Devon side elevating pop-top in strong wind – at one point I shut it, worried at how much the canvas side was bending in. I wondered if i’d have to test out the contingency plan of making a bed across the front seats for our 9-year old son. However after turning the van round so that the back was facing the wind, it was much less of an issue, so with a couple of pieces of wood wedged in and cable-tied in place, the upstairs bed was fine to use.

We spent a lot of time hiding away in the van watching films, listening to music and drinking tea – pretty much the same as we would have ended up doing at home in Bristol on a rainy weekend. Between rain storms we headed down to the arena and had a nose round the “show and shine” vehicles and stalls, picking up a vintage deckchair and LED reading lamp, amongst other things.

A good fun event – just a shame that the bad weather dampened the BBQ/ socialising vibe!