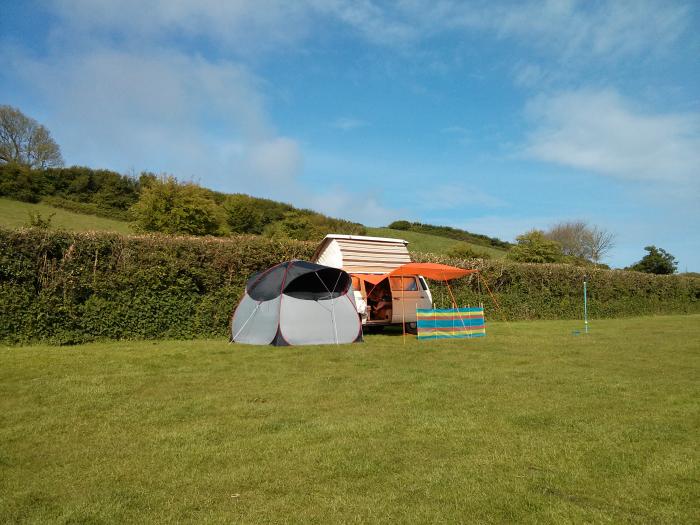 We lucked out again with a sunny bank holiday weekend in North Devon, chilling out with friends in a field and on the beach for a couple of days, before they had to head off on the Sunday.

We got to try out the new funky leisure canopy, and it worked really well, although I have since noticed (from looking at the pictures on that web page) that we forgot to add the pole extensions which would have made it a bit higher. We also managed to burn a couple of small holes in it, with sparks from our nearby fire – something worth bearing in mind!

Despite rain being forecast for the monday, we decided to sit it out rather than head home – setting up the van for a day of film watching, tea drinking and board game playing. It was worth it for the sunny tuesday morning parked up at putsborough beach for some skim-boarding and more tea drinking!

The 1Y engine is still going really well, though i’m a bit concerned about the amount of oil it is using – there’s no smoke or leaks, but there are drips from the top of the dipstick when running which end up splatting up on the tailgate. This could be from overfilling – the short dipstick means that i’m constantly topping it up so that I can get an idea of the level, which only just appears on the end of the dipstick when full. I can’t always check it on level ground, so am potentially overfilling it each time. A custom dipstick is on the cards – when the level is low I need to know exactly how low, so I can properly monitor it.