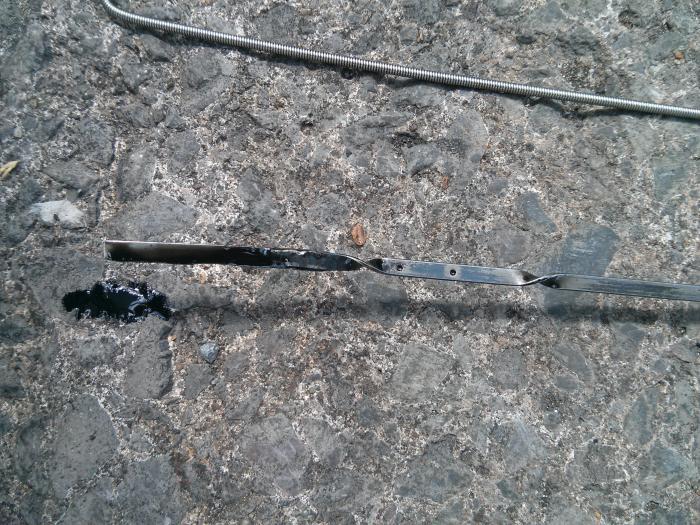 After having a 1Y engine fitted to our T25, using the oddly shaped sump from the 1.6, the old dipstick (which i’m not even convinced was the right length for the 1.6) apparently only showed an oil line on the very end when filled to the max capacity of 4.5 litres. This made it really difficult to monitor the oil level as I had to constantly top it up to make the oil appear on the end of the dipstick, or risk letting it get to low. Inevitably I would overfill, which isn’t good for the engine.

A workaround I tried was to carry around in the van an old bass guitar E string to use as a secondary dipstick, which actually worked pretty well, but I wanted something to do the job properly.

I emailed T25 Direct in London to ask what they did on their 1Y conversions, and they said that they weld a spare bit of dipstick on the end of the original, put in 3.5 litres, turn it over to fill the new oil filter, mark the low oil mark with a grinder, then put in another litre and add the high oil mark.

It had been over 1000 miles since the engine was changed, so I drove down to see Phil Miller, who did the conversion earlier in the year, for a checkover, oil change and to sort out a custom dipstick.

One thing I’ve noticed is that reading the oil level really can be hit and miss on a T25 – with this conversion, the dipstick tube is bent towards the access flap, and goes slightly over vertical, which means sometimes when the dipstick is drawn out, the oil can flow slightly up the dipstick.

The fluctuation in oil level (or misreading) is quite confusing. Alarmingly, after a 100 mile run up the motorway, Rocky appeared to have used a litre(!) of oil, despite there being no smoke, and no visible leaks. I topped it up slightly to within an acceptable range on the marks we put on it, and 100 miles later it appears not to have used a drop!

Needless to say, i’m keeping an eye on it. If it was smoking a lot i’d be worried, but I think (hope!) this is just a calibration issue.