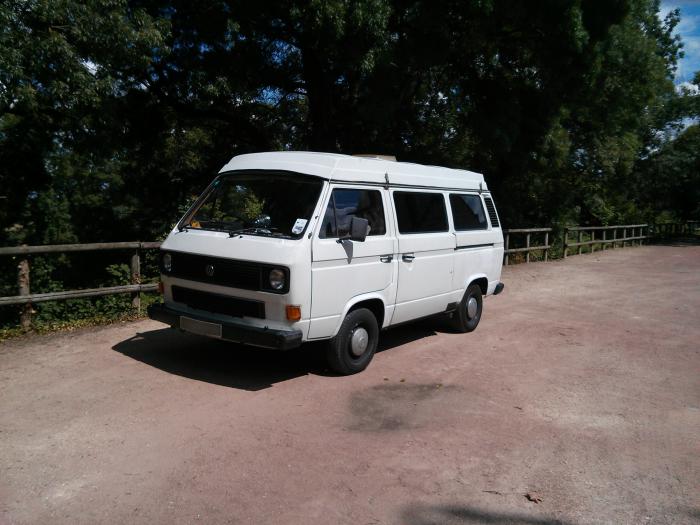 It’s nearly a year since we picked up our VW T25 camper. In that time, we’ve:-

I’ve also spent an unhealthy amount of time on the T25/T3 forums and Facebook groups enjoying reading about what adventures other people have been having with their vans and what they’ve been doing to them. One thing that is clear is that it is possible to spend a massive amount of cash improving a T25, from professional bodywork restorations, suspension mods and massive alloy wheels to powerful subaru or tdi engine replacements.

Personally I’ve decided that I need to rein things in, and concentrate just on keeping our bus roadworthy and ready for more adventures. I have a list of things that need sorting before I would be happy to take Rocky on another overseas trip. The fuel lines and the fuel tank breathers need sorting out, but also it looks like I need to consider an engine rebuild or another engine swap, as the 1.9 engine I had put in, although it runs brilliantly, is using an unsustainable amount of oil. The consensus seems to be that it is burning oil (basically using it as fuel) due to worn piston rings and/or bores.

I was hoping to get at least a couple of years out of this engine, but it hasn’t turned out that way. If I had the tools, skills and space to attempt an engine swap myself, I might have been tempted to try my luck with another old engine, but I really think its time to look at having the current engine dismantled, inspected and reconditioned/ remanufactured as needed which would hopefully add many more years life to it. Tempting as it is to save up for a Tdi conversion which (along with an appropriately geared gearbox) would make the van faster and more suited to motorway driving, i’ll settle for a reliable simple engine to plod along with in the slow lane, and put the cash saved towards more road trips.

However, our other “ongoing project” is a Victorian house, and the bus has diverted cash and attention away from the house over the last year, and this needs to be rectified. I’ll need to redo some of the aforementioned bodywork before the winter sets in, but other than that I’ll have to ignore him for a while, and concentrate on the house instead.

One thing i’m sure of though, is that despite the ongoing costs, we have had a lot of fun with this bus, and are really glad we bought it. Still looking forward to many adventures to come!