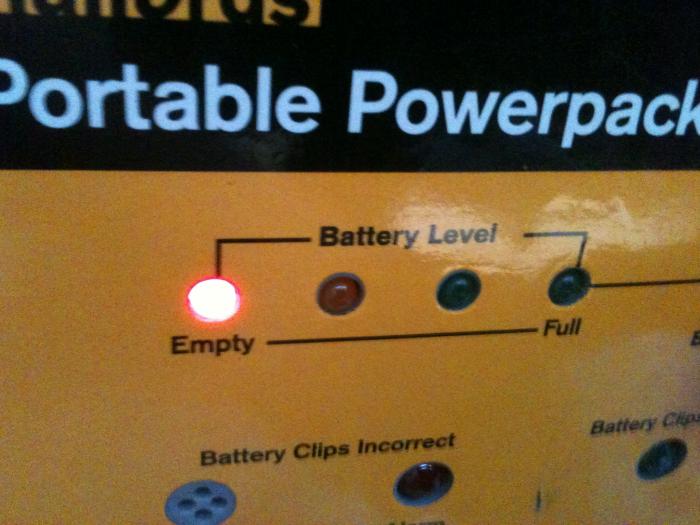 As an experiment, even though i’m working mainly from home, to simulate working on the road, I thought I would see if it’s possible to work for the entire week without plugging into, or charging from the mains.

In an unscientific way, i’m starting from:-

Meanwhile the macbook is being powered and charged by the leisure battery (via the trust car charger plugged into the 12v output and DIY magsafe cable). When it reaches full charge i’ll leave it plugged in, on the basis that powering a laptop is more efficient than charging it. I’m doing some layout/ design stuff today, so I want to use the macbook rather than the netbook if possible.

Starting work at about 10am (i’d usually start earlier, but had car problems in the morning), I get a full macbook charge just after midday, but the macbook starts discharging at about 2pm. I was hoping to get more out of the leisure battery! By 3pm the macbook is getting very low on the internal battery, so I go and unplug the powergorilla, which is showing three bars out of 6 on the charge scale. I move the solargorilla to the velux window at the front of the house and plug the solargorilla into the leisure battery. I then plug the partly charged powergorilla into the macbook. I get about 20 minutes of charging before it is drained flat! At this rate there’s no way i’m going to get a full days work. I still have the charged netbook, but it’s not set up for the project i’m working on, and I really need the extra screen estate of the macbook today. The brief bit of charge I got added about 10 minutes to the estimated run time on the macbook.

This leaves me with about 4 more hours of possible solar charging with which to start tomorrow with!

By 4pm I have to switch to the netbook for a bit, but really need to get back on the macbook, so I modify the experiment to allow me to go to a local cafe to charge up. After a moment of panic where I can’t find any plug sockets, I spot a double socket on a window sill so start charging the macbook and powergorilla with borrowed mains juice and charge myself with an americano.

I have to head out at 5.45, which leaves both the macbook and the powergorilla partly charged. When I get back home, I check the leisure battery, which although still showing a charging indicator hasn’t been charged a measurable amount (it has 4 LED’s to show charge status, and it’s still on number one).

As a last attempt to keep this experiment going tomorrow, I plug the partly charged powergorilla into a sleeping macbook to see if I can get an hour or two out of it tomorrow.