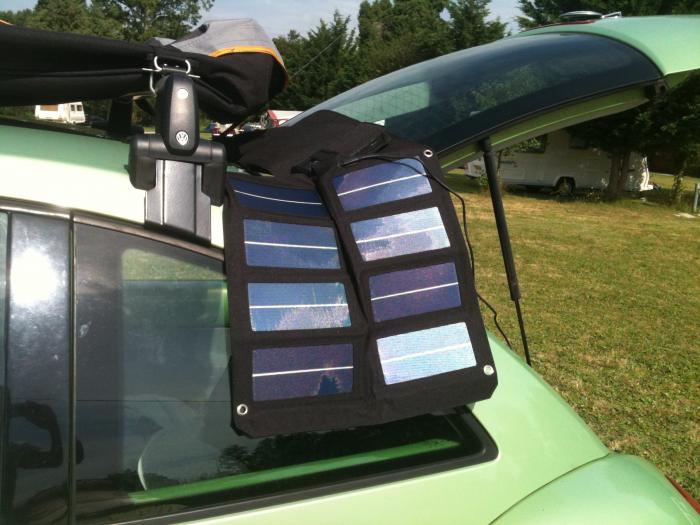 We’ve been on the road in france for a few days now. I have an iPhone with t-mobile sim, and was offered (via SMS) one of a few data roaming bundles when I drove off the eurotunnel in calais. I opted for a 30 day/ 200mb bundle for £40, which should be plenty enough for checking email and the odd bit of remote working. At the first campsite we stayed at in the town Jumièges, the phone was showing a strong 3G signal through Orange France, but it was struggling to download webpages, via the phone or tethered to my macbook. Sometimes they loaded, sometimes they didn’t – mostly the latter. I wasn’t planning on doing any serious work on the first day anyway, but it wasn’t encouraging.

The campsite was shady and the clouds were grey (followed by thunderstorms and lightning), so it would have been pointless to try solar charging! The battery on my casio elixim camera had gone flat (probably accidently left switched on in the bag), and the only way I have of charging this is on the road is using the 240 volt inverter on the leisure battery. This is very inefficient, so took quite a chunk of charge out of the leisure battery. Packing up in torrential rain the next morning everything was a bit frantic, so I missed an opportunity to get some charge from the car while we drove the next 200 miles south.

The second campsite near the town of Ligueil in the Loire valley, had free wifi which stretched as far as our pitch a good 200 metres from the office, which was really useful. From there I did a couple of hours work, caught up on email and launched a few new features on one of the sites I look after. There was plenty of sun, so I plugged the SolarSupra panel into my leisure battery via the 12 volt connection to top it up. I haven’t got an accurate way of working out how effective this is, but I have to presume that it its a minimal trickle charge, so would require days of trickle charging to have any useful effect. When I am stationary for a longer period of time, i’ll try to to leave this hooked up for a few days to see how it fares.

Back on the road heading south to St Emilion, I plugged the leisure battery into the 12 volt socket conveniently located in the boot of the beetle, and by the time we reach the campsite it was fully charged – if only I could get that kind of charging power from nice clean solar power. Also along the way, stopped at a services near Tours my mobile data connection allowed me to check my email no problems, so i’m thinking it will just be a lottery, but at least I know where will be a good bet when we head back up this way.

Meanwhile i’m going to try to charge my iPhone exclusively from the SolarMio for a while to see how I get on with that. I can’t help but cheat a bit as every time I plug the phone in to the laptop to get photos off it, it charges a bit!

The site i’m currently on – Camping Domaine de la Barbanne in St Emilion, has wifi but I need to go and pay for a time period, and the signal doesn’t reach our pitch. This means I need to work offline, then probably before I leave, will pay the minimal amount to check my email (i’m getting no data connection here) and upload some work. I think this will be the case for much of this trip, so i’ll make note of any useful lessons as I go.