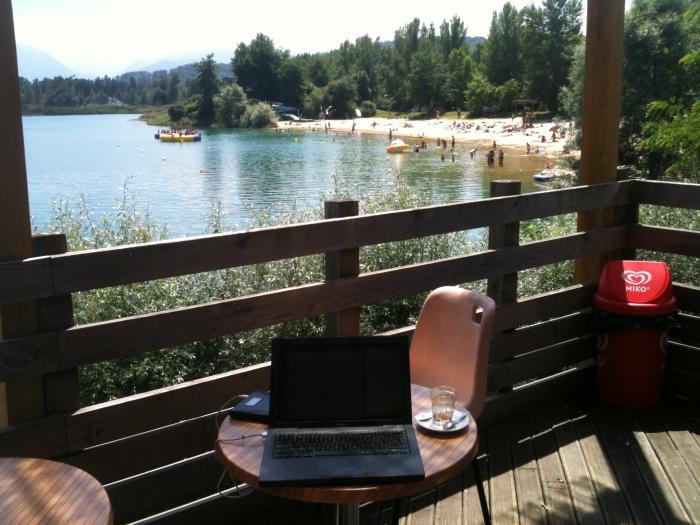 The temperature gauge in my car says it is 28 degrees centigrade in the shade. I spent most of the day working on the balcony of a campsite bar, using my very little french “Une cafe noire sil vous plait” to procure coffee, because I really shouldn’t start on the beer yet, and the french don’t really do tea. Despite my appalling pronunciation, each time I receive an espresso in a glass or cup, and know (from the change rather than the spoken response) that these cost me 1 euro 20 each time. Occasionally one of the bar staff speaks to me and I nod and smile – hoping that what they are saying is good, rather than “can you please leave now?”.

From the balcony I can see the “beach on the mountains” – a sandy beach on a turquoise lake, with the French Pyrenees as a backdrop. In the water are a load of kids (one of them my own), having a riot with an inflatable roundabout in the shallow part of the lake. At lunchtime I wander down and have a picnic lunch in the shade with my wife and son, then I wander back up to the bar. Although my solar charging experiments are showing some promise, I plug into the mains to enable me to work for a decent stint without the “plate spinning” needed to swap round partially charged batteries, while I get others charging.

If I wasn’t working, now might be time for a beer, but I stick with the espresso. It’s hardly “chilled” here, i’m being accosted by flies, I can barely see my screen, even in the shade. Some workmen take the table next to me and start talking far too loud, and seem to be enjoying themselves far too much at my expense, (or maybe that’s just my “not speaking the language” paranoia). To top things off, someone drops a whole tray of empty glasses and a splinter of glass pings off my arm. It doesn’t draw blood, but adds to the feeling that this isn’t exactly the ideal working environment. But then I look at the view again, and see my family enjoying themselves in the sun, and I know that i’m earning enough through working part of the day each day (or a whole day every other day) to justify the extended holiday, and that I am in fact living the dream.