Being as paranoid as ever I decided that normal ftp was too insecure for my windows server (particularly when developing using dreamweavers ftp-on-save on an open wifi network), so I am experimenting with freeSSHd, to provide me with an sFTP server. This appears to be right up my application, as it has a GUI for managing the users, home folder etc. and a nice easy button to press to start and stop it. It also runs as a windows service.

I tried out a friends pocket pc (or is it windows mobile now?) smartphone recently – a cool little device with a slide out QWERTY keyboard (I think it was a variation of this htc device). It also had wifi support so I thought I would try to blog from it. However, he hadn’t got opera installed and the wordpress gui completely failed to work in pocket internet explorer. I’m sure there is a solution to this, but I was disappointed that the wordpress online admin didn’t gracefully degrade.

This is something to consider when designing web apps – whilst AJAX could potentially be used to provide huge usability enhancements to people using mobile web devices with small screens – the majority of people are going to be using windows mobile with pocket internet explorer – your app should work with no javascript support at all. and then be progressively enhanced with AJAX as a seperate consideration. 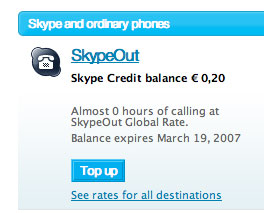 free credit today at skype! I just bagged myself “almost 0 hours of calling”. So soon after delivering me a free balance expiration – i’m made up! 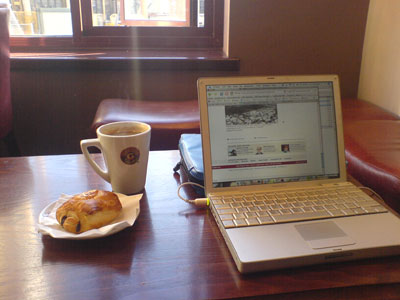 with the free muffin with my coffee this morning. Still the only cafe I have found on park street, bristol with free, reliable, in-house wifi. Mind you i’ve only tried a couple so far…

archived comments
Tried the watershed, no VPN access, or the Blue Juice Bar?

yep – i’ve tried the watershed, but is it open at 8am? Blue Juice bar I haven’t tried though – where’s that to then?

I needed to reinstall windows on my work laptop as it was getting a bit sketchy and unreliable in that undefinable way, so I took the opportunity to repartition the disk and set it up as a dual boot machine, with ubuntu. I created a primary 15gb partition for windows and installed win xp in the usual way, then used the partitioning tools in ubuntu to create a 15gb partition for data (Ext3 to be shared between windows and linux, by installing these ext3 drivers in windows), and a 6gb partion for the ubuntu install. It all went fine, but the wireless card isn’t recognised by ubuntu. I’ve looked into it – apparently I can get it working using some windows driver voodoo that goes by the name of ndiswrapper. I haven’t tested how/if ubuntu handles sleep and dual monitors yet, but will do at some point.

archived comments
Did you ever get the Wi-Fi card to work?

Yes I did, or rather I got someone else to get it to work – they had to download some firmware I think? I suspect a more recent version of ubuntu might make this easier as it allows you to install proprietary drivers, and the network select dailogue thing is working

once again, I have been obsessing about the idea of owning a mobile web device. I’m not sure what my business case is for owning one, other than the desire for something that can be carried around with me most of the time to use for email and full web browsing, smaller and lighter than a laptop and with better battery life than a laptop. The device needs:-

Only the nokia 770 comes close at the moment, but doesn’t have a qwerty keyboard. I keep seeing other devices crop up, such as sony’s forthcoming mylo, but the screen resolution lets that one down. I’m quite tempted by some of the clamshell smartphones, but I don’t want a phone that big, valuable and breakable. 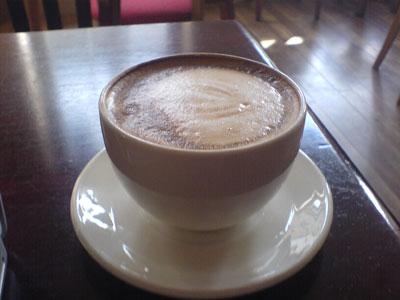 I have hatched a plan to satisfy both my urge for expensive coffee variations and the idea of wifi breakfast nirvana on park street in clifton, Bristol. Or near park street, as it seems that there aren’t actually many places to get breakfast on park street at 8.30. My plan is to do this once a week (because of time and money constraints)
Here are my criteria:-

Today I find myself in Boston Tea Party. Upstairs is a room with plenty of space, tables, sofas etc. Nice atmosphere – although a bit quiet and library like this time of the morning. Wifi wise I am currently connected to streetnet. I did notice a WEP protected network called BTP, with a much stronger signal than streetnet, but when I asked the staff for a password I was told to use streetnet, they didn’t admit that BTP might stand for Boston Tea Party, but I didn’t push it. Shame because for some reason the streetnet signal seems to vary and i’ve already had to reconnect once.

I won’t do any ratings because I need to try some other places first to compare it to, but it is definately a contender.

UPDATE: Actually, the streetnet connection in Boston Tea Party is very flaky – I wanted to correct my misspelling of “definately” in the last paragraph, but got booted out (of the wifi, not Boston Tea Party) for the third time. I’m now correcting this from work. The flakiness could possibly be because I was running over an ssh tunnel (too paranoid about transmitting my passwords on a public network), so I was authenticating in one browser, then using another web browser running through a web proxy on another browser, maybe it saw me as inactive and logged me off or something? Either way – park street cafe bars take notice – if you want my massive £2 a week business, get yourself some wifi for customer use 😉

It makes sense really when you think about it, but confused me for several minutes! I was about to blame it on the new pine door downstairs… 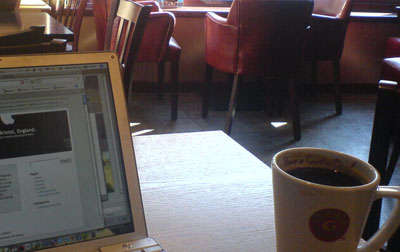 what’s this? i’m actually blogging again after a break of about six months – new site, new URL and everything. I’m not going to explain everything in this post, i’ll save that for when I “offcially” launch rickhurst.co.uk

no i’m blogging today because I decided to drop in at caffe gusto up at the top of park street on my way to work to have a coffee and use the free wifi. goddam it’s hot, but with the latin music and sounds of the cafe and non-english accents downstairs it seems about right, for a minute here I could be in spain somewhere, rather than just round the corner from work where I shall shortly go and ascend our many, many stairs and stand in front of the fan sweating for a while!