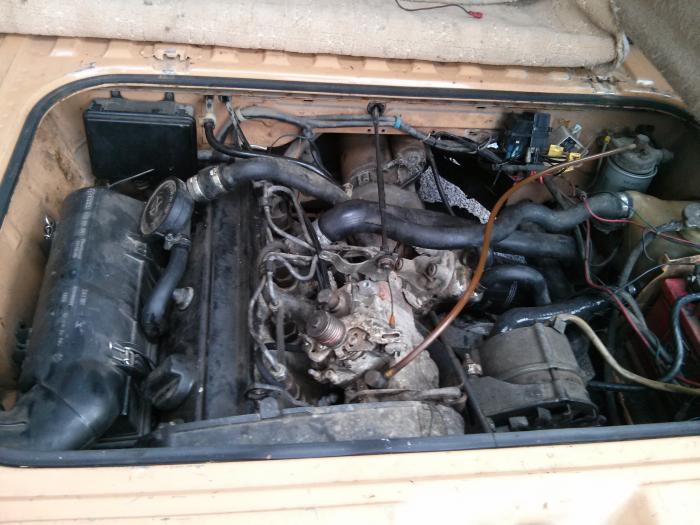 I’ve mentioned a few times before how I find the frugal little 1.6 CS non-turbo diesel engine that Rocky came with a bit underpowered. Before we bought the van I did a bit of research on the forums, looking at threads with people asking “is a non-turbo 1.6 diesel VW T25 it really as slow as people say it is?”. No-one challenged this assumption! Several people mentioned that they had been driving one for years and were happy with them, despite the slowness. They are also the most economical factory-fitted engine option. So on this basis that we wanted a diesel, and there were plenty of 1.6’s around we went ahead and bought one.

With the 1.6, on the flat Rocky will happily cruise along at 60mph, which is fine as it means we can keep up with the trucks. But the hills, oh my. Even on a slight motorway incline we often find ourselves having to drop down to 3rd, which puts us at about 40mph tops. Sometimes this happens mid-way through overtaking a truck, which can be particularly embarrassing. On steep A-road hills, it’s often necessary to drop down into 2nd gear, revving the life out of the engine at 25mph, worrying that either the engine, or I, will blow a gasket before we reach the top!

So a few months into owning Rocky, I started to find myself avoiding doing certain trips, or changing my route to avoid steep inclines, and coming to the conclusion that I was compromising too much, and would enjoy the van more if it had just a bit more power. As the 1.6 was starting to reach the stage where it will need some work anyway, I thought I should start looking into alternatives.

There is a wealth of information on club 80-90 and Brickwerks about alternative VW/ Audi/ Seat/ Skoda diesel engines, and doing further research, people have also fitted non-vw engines. The price and amount of bespoke work needed varies greatly – we would be looking at spending more than the van is worth if we decided to upgrade to an Audi Tdi + gearbox, which would require custom mounts and wiring loom. I’d also want to upgrade the brakes if I went down that route.

At the other end of the scale is the non-turbo 1.9 “1Y” from a mk3 vw golf or similar. This is almost identical to the 1.6 CS so is a relatively straightforward swap, reusing the sump, alternator, waterpump and exhaust and keeps the van simple (and I do love simple!), without the need to add an ECU, as you generally would with a turbo diesel. The 1Y doesn’t provide a dramatic power increase like a TD or TDi, so I canvassed opinion on the forums – is the upgrade actually worth it? Everyone who had upgraded to a 1Y said yes, it’s definitely worth it, is better on hills and in particular solves the “slowing down on motorway inclines” issue that bugs me most.

Several T25 owners have done the 1.6 CS to 1.9 1Y engine conversion themselves, but with lack of off-road workspace, tools and knowledge I thought it was too much to take on without help, so I tracked down Phil Miller on club 80-90 forum, who not only had an engine to sell, but was willing and able (as a professional mechanic by trade) to fit it at an attractive price, and give me a 3 month guarantee on the replacement engine and work.

As i’m keeping the original 4-speed gearbox, I can’t expect to increase the top-speed, or cruising speed – the engine will rev just as much as the old one. The plan is to drive it around as-is for a while and if I think there is surplus power, I can look into a higher-ratio set-up, the cheapest option being simply fitting larger diameter tyres.

Today, I went to pick up the van – Phil had done a fantastic job, despite working in sub-zero temperatures in the dark some evenings to make sure my van wasn’t kept off the road for too long. He kept me informed on how the job was progressing throughout and made sure that I understood the reasons why things were done in a particular way. Phil has also done a TDi conversion oh his own T25, and, even though it is a more powerful engine, he was really pleased with the 1Y conversion on mine because it went so smoothly and the resulting engine looks like it is factory fitted, with little or no bespoke parts. In fact the the only modifications needed were to fabricate a bracket for the throttle cable, and move a small amount of insulation from the underside of the engine cover to provide clearance for the fuel pump. The only thing that needed ordering that couldn’t be taken from either engine was a spigot bearing for the gearbox input shaft.

So how did it perform? Basically exactly as I had hoped, and probably a bit better! The steep hills on A-roads that I would have needed to drop into 2nd gear, I could do in 3rd, and most places where I would previously have had to drop into 3rd I could stay in 4th. Pulling off in in 1st gear feels much better, it feels safer pulling onto the motorway and once on there I sat happily at 60mph+. On the steepest stretch of M5 (heading north approaching junction 19, where it was steep enough that there is a crawler lane) it did drop from 65 to 60mph, but was such an improvement from last time I did that stretch with the 1.6, that I had a massive grin on my face by the time we left the motorway!

Obviously only time will tell how the engine will last – it wasn’t exactly a spring chicken to start with, but has had a tidy up including new timing belt, and there’s no reason why the engine shouldn’t last for many years to come. I can’t say the same thing for the old 1.6 engine – Phil noticed a hairline crack on the cylinder around one of the injectors, and lots of end float on the crankshaft, so it was coming to the end of its useful life. Phil also confirmed my suspicion that the dipstick is too short, and therefore that I had been overfilling the oil, which might explain a few things!