I mentioned in my post about eatStatic that I was using JSON files for storage of objects and arrays, but hoped to make it switchable to use mongdb. This is part one of a two-part post, demonstrating use of JSON files with json_encode() and json_decode().


If we create an instance of this and add some data:-


If we now encode it as JSON:-


At this point, we can save the file to the filesystem – I tend to create a unique ID based on the current date/time and a random string. I won’t detail it all here, but you can see some of the helper functions I use in eatStaticStorage.class.php and eatStatic.class.php. One thing worth noting is that sometimes when reading a .json file back in from the filesystem, I was experiencing a bug where the last three characters were omitted – i’m not sure what was causing this, but it was fixed by changing my read_file() method to use file_get_contents(), instead of fread().

Once you have retrieved your JSON string you can decode it again:-


Notice that the array “skills” is now an object. We can set it back to an array using get_object_vars():-


nb: this only happens for key => value arrays, if it was just a simple array e.g. array(‘css’,’sitebuild’), we wouldn’t need to pass it through get_object_vars(), as it would be maintained as an array.

This gets us back to where we started:-

The above example is very simple, but it can get quite complex when your object contains arrays of objects, which in turn may contain arrays (and arrays of objects). The initial cheap and convenient trick of encoding an object instance and saving it, then retrieving, decoding and using it can then get quite hairy, but still less effort than splitting it out into different objects and maintaining in several different relational database tables.

In part two i’ll talk about how to use mongoDB to save and retrieve object instances in PHP. 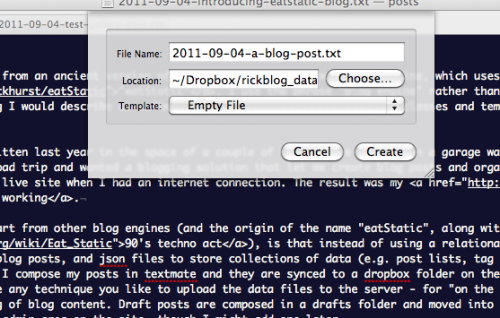 Recently I ported this blog from an ancient version of wordpress to my own simple blog engine, which uses my PHP5 micro-framework, “eatStatic”. I use the phrase “blog engine” rather than blog software, as it isn’t really packaged up yet as something I would describe as software – its more just a collection of classes and templates that can be used to keep a blog.

The bulk of the code was written last year in the space of a couple of hours while sitting in a garage waiting for my car to be fixed – I was about to go on a long road trip and wanted a blogging solution that let me create blog posts and organise photos offline and then conveniently sync it to the live site when I had an internet connection. The result was my “on the road” blog about mobile working.

The thing that sets this apart from other blog engines (and the origin of the name “eatStatic”, along with a nod to a 90’s techno act), is that instead of using a relational database to store content, it uses simple text files for blog posts, and cached json files to store collections of data (e.g. post lists, tag references etc.). I have it set up to run with dropbox so that I compose my posts in textmate and they are synced to a dropbox folder on the webserver. You don’t have to use dropbox though – you can use any technique you like to upload the data files to the server – for “on the road” I use subversion, which means I also have versioning of blog content. Draft posts are composed in a drafts folder and moved into the main posts folder to push them live. There is currently no admin area on the site, though I might add one later.

The published date and URI for each post are taken from the text file name – i’ve adapted it for this blog to use the same url scheme as wordpress to avoid link rot on legacy content. Some people asked me why I don’t just use the title and created/ modified date of the text file to make it even simpler, and the answer is that I wanted finer control, and the option to specify the publish date – using created/ modified would have been a disaster for the content I imported from wordpress. Also by naming each file starting with YYYY-MM-DD, the post files are easier to sort/ find in the post folder, both visually/ manually and in code. You can use HTML in the blog post and additionally line breaks are converted to br tags, other then immediately after a closing tag. You can add tags and metadata at the end of the text file.

I’ve also got a simple thumbnail gallery which can be included in a post (see below) by uploading a folder full of full-size images with the same name as the post. The idea behind this is that a set of jpeg/ png images can be imported from a camera, and automatically pushed to the server by dropbox. A caching script creates the thumbnails and web-size version on demand, which are saved to the filesystem for efficiency during subsequent requests. I considered setting it up so that each post had it’s own folder, which could then contain images, but the blog engine was mostly written with the idea of quickly creating posts by opening textmate/ emacs, writing and saving rather then faffing around with creating folders.

I made the decision not to build in any commenting functionality – the anti-spam / moderation features needed are too much of a pain to deal with, so i’ve archived the old wordpress comments into the post body and integrated disqus instead.

As I mentioned before, I’ve been using a previous version of eatStatic successfully for my “on the road” blog, but I wanted to see how it coped with 100’s of posts rather then just a handful – it seems to be doing fine, coping with over 600 posts, but i’m sure there is room for improvement. I’ve also been investigating making the json read/write switchable to use mongodb so that it could potentially be very scaleable – i’ve encountered a few inconsistencies in the way that PHP json_decode() and mongodb object retrieval work, but nothing that can’t be worked around – expect a blog post on that later!

I don’t expect eatStatic blog to be a wordpress killer, but it may appeal to techie types who want a lightweight PHP5 blog engine, maybe to plug into an existing site and people who want to compose posts in textmate/ emacs (or any other code editor), rather than in a web form. If you are interested in trying it, keep an eye on the github repo, as i’ll commit an example of how this blog is formed, once i’ve ironed out the more embarrassing bugs! I may add a simple admin area at a later date, to allow publishing entirely via the web, and I think it would also benefit from a “post by email” feature, for convenient moblogging, but don’t hold your breath!

When I was importing content (I actually wrote a python script to parse a wordpress xml export file and create the text files), I found it quite fitting that the first ever post on this blog nearly ten years ago was made on a home-brewed ASP blog engine which used XML for data storage. I think before then I kept a static HTML blog of sorts, on a freeserve site, but unfortunately haven’t got a copy of that for completeness.

Lastly, whether or not you want to set up an eatStatic-based blog, if you aren’t already using dropbox, it really is excellent, so why not sign up for free 2GB account using my referral URL, so I can get some more free space? Even though I have a paid dropbox account, I use a second free account to mount on my server for automated site/ database backups and for this blog and it keeps filling up!