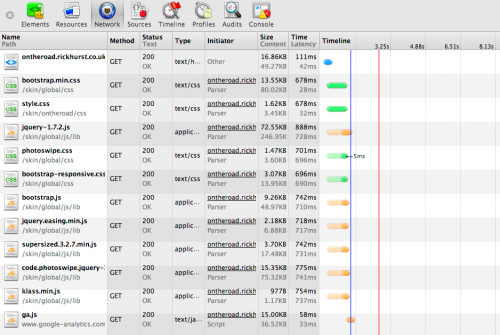 I’ve been getting carried away with my Camper Van blog over the last couple of weeks, overcompensating for my lack of actual design skills by adding loads of fancy effects such as Supersized full-screen background images, and Photoswipe for responsive photogallery/lightbox.

Looking at the network tab in chrome developer tools I was reminded how many http requests are needed to serve all the seperate css and javascript files, and that I needed to optimise it a bit. There’s loads of different ways to combine and minify CSS and JavaScript assets – for example using something like Live reload on the desktop during development, or using a server-side on-the-fly system, e.g. Django Compressor on a Django site. In either case this is usually in conjunction with a CSS pre-processor such as SASS

As “on the road” is a PHP site, and I haven’t got round to setting up SASS stuff for it, I decided to use PHP minify, which lets you specify groups of assets to be combined and minified, then serves them up on the fly, using caching (filesystem or memcache) to keep it snappy. The set-up is fairly straightforward, the only thing that might trip up a novice is setting up the caching.

As a result (after a bit of refactoring to get things working after moving the js from the head to just before the closing body tag), I now have the site loading in a single js and a single css file, considerably improving the load time, and neatening up the source code. Note that these two screen grabs were taken on different internet connections so the actual load time of the assets shown isn’t a good comparison. 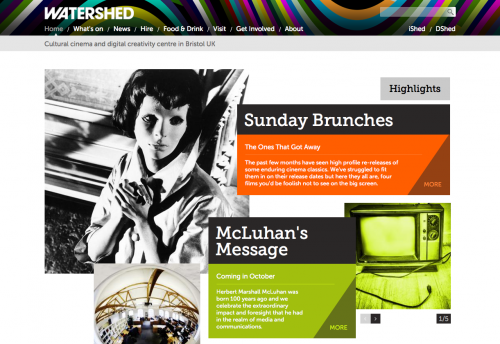 Yesterday the www.timmytime.tv was was finally launched. I worked on this project along with the Aardman digital team building a bespoke php CMS and putting the site together to accommodate the mostly flash content with HTML alternative (where possible). XML was used to share the same data between flash and PHP, making it easier to maintain.

archived comments
Congratulations for this work Rick. It’s a really nice one!

I was really chuffed to be asked to help the aardman online team out with the build of the new aardman.com site. I took the supplied photoshop designs and created HTML/CSS templates that were then handed over to be integrated into the CMS. I’m currently doing a lot of freelance work for digital agencies and I haven’t been able to talk about the websites i’ve been working on, so it’s great to be able to shout about this one!

IE6 doesn’t display transparent png images properley – by default the parts that are supposed to be transparent display as grey instead. Fortunately an excellent workaround exists in the form of PNGFix by Twin Helix. However this doesn’t completely solve the problem: if you are using transparent PNG’s as links – only the non-transparent parts of the image are clickable, which can be a significant usability issue. So far I haven’t found an elegant workaround for this, but would be interested to hear of any.

archived comments
Had exactly the same problem on a site build last week.

To the best of my knowledge there is no work around 🙁

My work around was less than elegant – but I resorted to using the PNG’s in FF, but then slicing out the alternative GIFs from a screenshot taken from the working Firefox version.

Clunky and annoying but it did work reasonably well visually…

Another thing that may help in some circumstances – look into PNG8 alpha transparencies. Which degrade quite well in IE…

I have a real-world example of where this would be useful in plone skinning – in some places inline images are still used for icons (here and there – they are generally being phased out). At the moment I usually set them to display:none and apply padding and background image to the containing element, but this may be a better solution.

archived comments
Just wanted to say thanks for this. 🙂 It is exactly what I need for over-riding some annoying hard-coded images in a blog I’m skinning.

Fantastic – at last a solution to IE background image flicker that doesn’t involve applying background images to containing elements. I will be using this – I’ll be interested to know if I can use the IE CSS filter version without a performance hit, as that could just sit in my IE-only stylesheet.

archived comments
Yes, you could.

Write the css rule so it will remove itself from the stylesheet after the first evaluation.
I’ll write an article on my blog about this technique.

On a custom plone 2.5 skin we found that the livesearch results were getting overlapped by certain elements of the content including action menus and elements within a composite page, in IE6. After much trial and error this turned out to be because I had used absolute positioning on the search form, which obviously confused something somewhere along the line. I also had to remove position:relative from a couple of containing elements to get it to work. As this was a custom skin already fairly heavily modified (both css and template changes), I haven’t narrowed down exactly what was happening yet, or if there is a better way to address it, but I ended up moving the form and using floats and margins to get it in position.

The plone livesearch template and CSS code seems a little over-complex to me, and I don’t really like the use of an HTML fieldset to render the results, as this is always the first thing I break during a customisation so I may create my own version in due course (in private of course, before I go around claiming I have a better version than the one that ships with plone!).

archived comments
Yes i agree, the livesearch css is a bit overly complex. i’m attempting to slightly restyle the plone live search. I have copied the livesearch css from the public css file and pasted this into my default css in my skin product. The live search layer displays on the left of the screen and not as expected on the right? Have you had similar experience? any ideas? This display is the same in firefox and ie7. Also the search div layer isn’t overlapping. When the layer appears it pushed the rest on the page contens below it. Hmm

Just noticed this incoming link where someone else found a slution to this same problem:-

“adding z-index:1” to the parent – parent of which element I wonder?

The first site i’ve had to fix for Internet Explorer 7 is our very own www.netsightmcc.co.uk (Netsight Metropolitan Colocation Centre – the website for our Bristol datacentre). It appeared that in IE7 RC1, none of the content of anything other than the homepage was visible. We were only alerted to this by a potential customer phoning up for more information, which the site seemed to be lacking.

The reason for this appeared to be an even more aggressive version of the so-called peekaboo bug found in IE6, although this site works fine in IE6. By applying a (hack) of a 1% height to a div that contained the missing content, it now appears to be working OK in IE7 RC1. I haven’t filtered this hack out into an IE7 specific stylesheet yet, but will if I spot any undesired side effects. Maybe there’s a better way of fixing this? Time will tell, or maybe a stranger will.

Apparently CSS-P stands for “CSS positioning”. At least that’s what a quick googling google search querying tells me. I came across the term in a job advert I stumbled upon.